The first practice started late because the gates to the high school field were locked, and one of the first games was nearly postponed because the paint for the center logo wasn’t fully dried before kickoff. 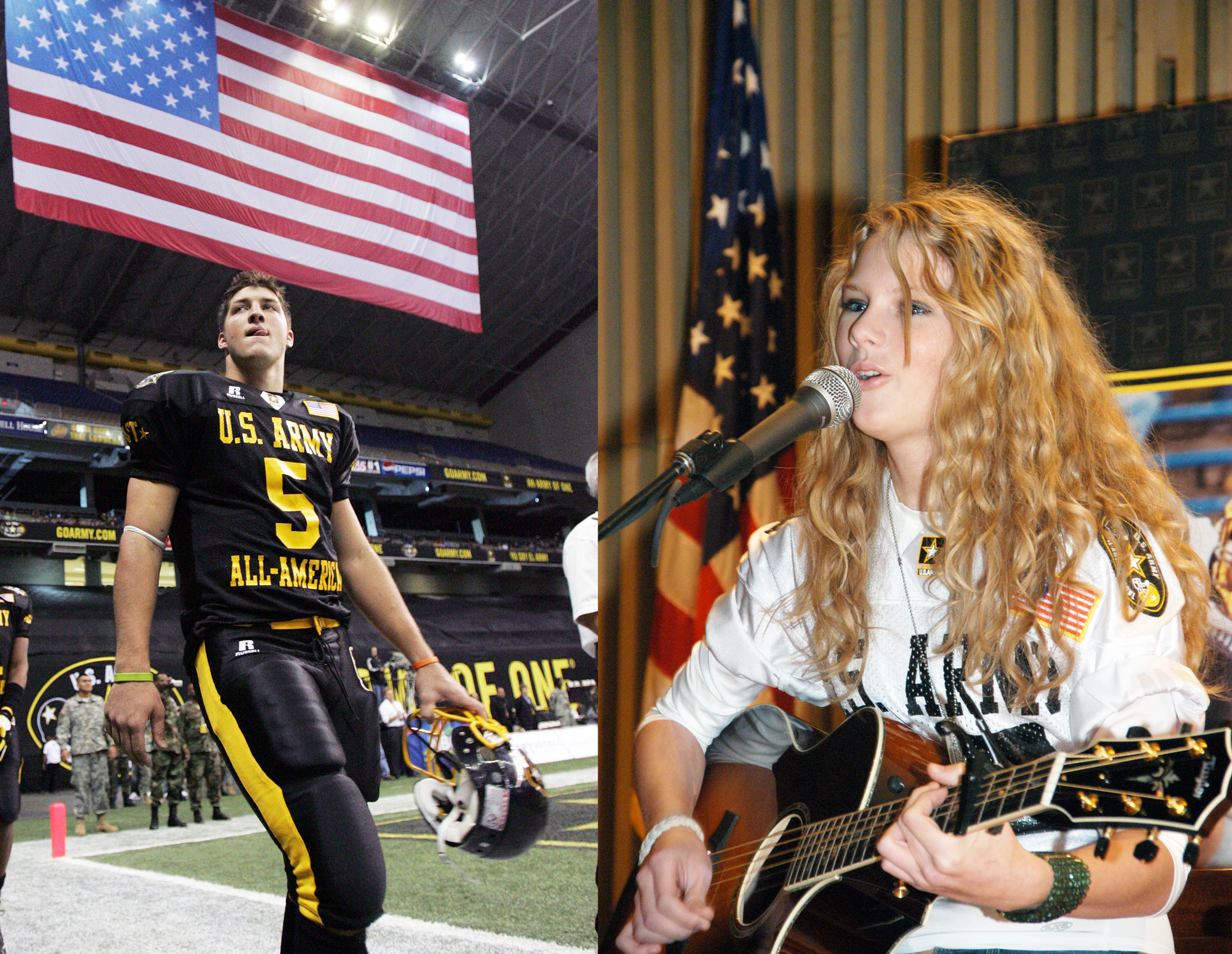 From Tim Tebow, left, to Taylor Swift, the All-American Bowl has attracted superstars from all walks of life. Courtesy photos 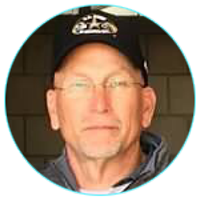 Mike Kirschner is one of Indiana’s most decorated and respected football coaches, shaping Ben Davis High School in Indianapolis into a perennial power. But on a mantle full of plaques and trophies, including two Indiana 6A state championships as head coach, Kirshner includes mementos from the 2017 All-American Bowl.

He was honored to be the East team’s head coach, and he shows off his All-American branded hat, playing cards of his players and the commemorative video.

“My career is winding down and, along with winning the state titles, coaching at the All-American Bowl is one of my top highlights,” says Kirschner, now the head coach at Mt. Vernon High in Fortville, IN. “I was just telling my wife that after a movie just the other day. You get to coach some of the elite athletes and coach with elite minds from all over.

“It was the experience of a lifetime.”

The game’s undergone a meteoric rise since 1,500 people attended the inaugural game on Dec. 30, 2000 at Highlander Stadium in Dallas. Since then, there have been key developments — such as moving everything to San Antonio — and partnerships with the likes of the U.S. Army and now NBC Sports. But the game consistently draws the nation’s top recruits, with notable alums such as Andrew Luck, Jamaal Charles, Odell Beckham Jr., Adrian Peterson, Joe Thomas and Robert Quinn, among many others, and now counts over 400 participants who competed at NCAA Division I programs.

Half Time Show Presented By SportsEngine

The West Austin Youth Association (WAYA) will play a flag football game featuring boys 10 and under. Highlights to be broadcast during the third quarter during the NBC telecast.

Chad Grier’s experienced the All-American Bowl in multiple ways: serving as an assistant and head coach, as well as watching his sons participate in the game. He’ll never forget the impact the experience had on his eldest son, Will, who starred for him at Davidson Day School in North Carolina.

“He played at a small school, and you realize that the United States is a big place,” Grier says. “But practicing and playing gave him the confidence that he could play with the best of the best.

“My family has had a great experience with the game, for my boys and certainly for me as a coach. The All-American Bowl is the absolute pinnacle.”

Will, after a brilliant senior season at West Virginia, finished fourth in voting for the 2018 Heisman Trophy. 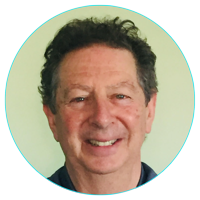 Lofty words like “pinnacle” and “standard” weren’t tossed around in the early years of the All-Star football game. The founders, Doug Berman and Richard McGuinness, were based in New Jersey but believed the first game needed to be in football-crazed Texas.

The first practice started late because the gates to the high school field were locked, one of the first games was nearly postponed because the paint for the center logo wasn’t fully dried before kickoff and pre-game sparklers created what one observer described as the “Smoke Bowl” for the first 10 minutes of a game.

Naples High head football coach Bill Kramer, an inductee in the Florida High School Athletic Hall of Fame, recalls one of his players being invited to one of the first All-American Bowls.

“But he didn’t know much about it, so he didn’t go,” Kramer says. “But I’m sure he wishes he’d have gone now.”

How much has the game grown? 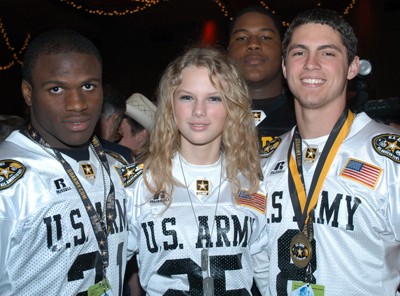 Singer Taylor Swift before she was a megastar.

“I remember there was a young singer who wanted to play for our players,” Berman says in recalling how, in the early years of the event, he landed a performer who would become one of the world’s biggest pop stars. “That was Taylor Swift, at 14 or 15.”

One of the keys to the All-American Bowl’s success was the U.S. Army’s sponsorship. It provided the game’s organizers capital and credibility. Another important decision was moving the game to San Antonio and, ultimately, the Alamodome.

Jason Mohns of Saguaro High in Scottsdale, Arizona, knew about the significance of the game for years. One of his assistants, Kyle Caldwell, was a highly-recruited prospect and had played in the 2003 All-American Bowl.

“He had a great experience,” says Mohns, who has led Saguaro High to six consecutive state titles. “It was something he was proud of.”

Mohns was thrilled to have one of his players invited to play in the game in 2014. 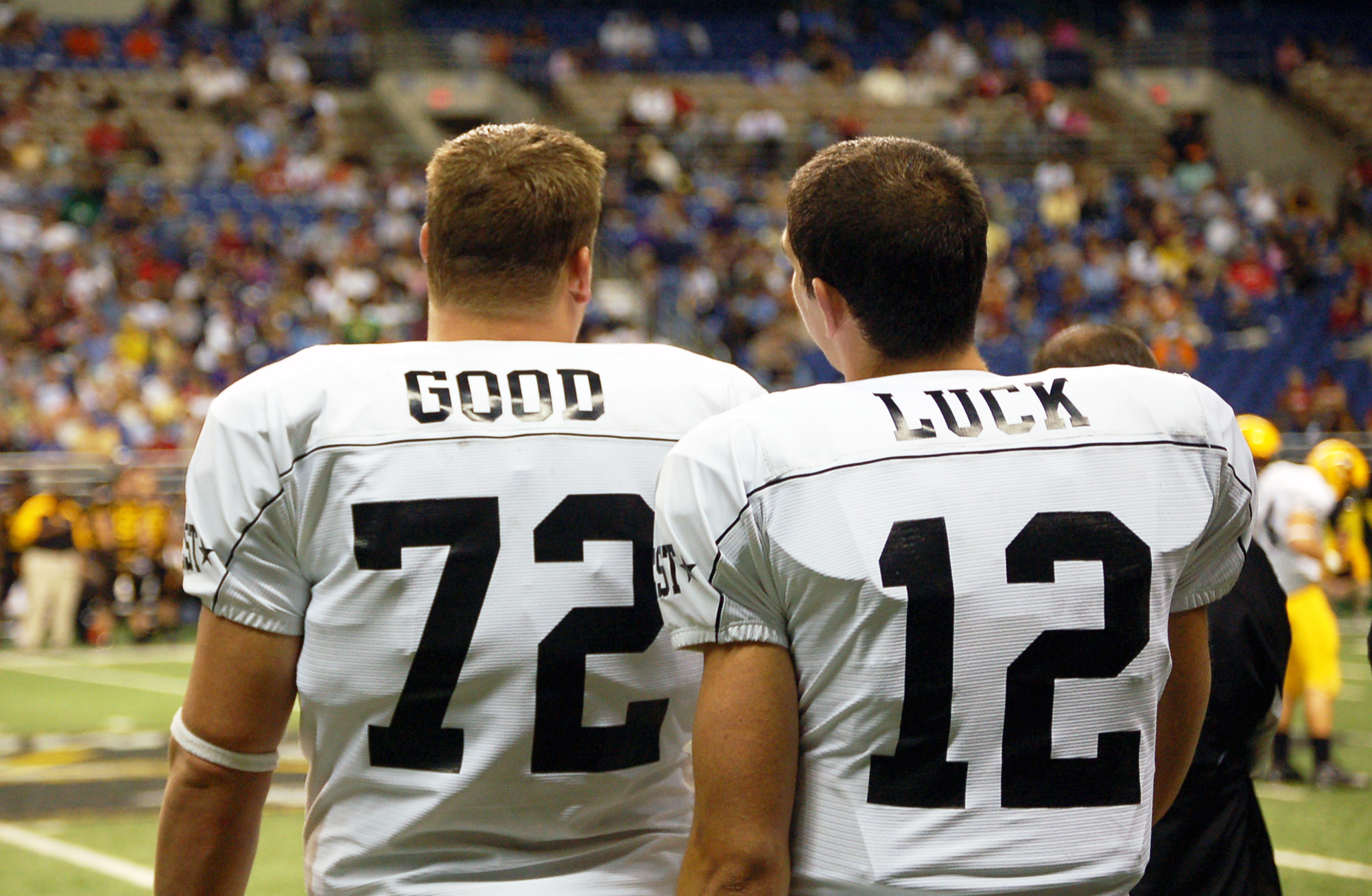 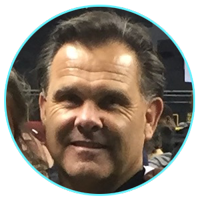 There are lots of high school All-Star games. But Kramer says the All-American Bowl distinguishes itself by consistently landing the best high school players and coaches and providing an unforgettable experience.

“It’s the standard,” Kramer says. “I think it’s closest to what a college bowl will be like for the guys.”

Steve Leisz, who established a thriving football program at Episcopal High in Bellaire, Texas, said highlights for the student-athletes include visits to an amusement park and a hospital as well as a San Antonio Spurs games.

“It’s a community event,” Leisz says. “The kids are there for the full week experience, and it’s all about camaraderie.”

Bishop O’Dowd (Oakland, California) running back Austin Jones was thrilled to be selected to play in this year’s All-American Bowl.

“Growing up, I've been dreaming about getting to play in this game,” Jones told 247 Sports. “Seeing all the players in this game then being invited was a surreal moment for me.”

“It’s always been a dream of mine to play in that game,” Mellusi told the Naples Daily News. “I’m just happy it happened. It was one of my biggest goals in high school. Of all the accolades I’ve gotten, this one tops it off.”

Berman and other event leaders believe in rewarding high school coaches by selecting them to lead the teams.

“There have never been ‘star,’ or ‘honorary’ coaches,” Berman says. “We wanted this to be a celebration of high school football and those coaches who give their lives to help.”

Nearly a year ago, Kirschner tuned in for the College Football Playoff National Championship between Georgia and Alabama and marveled that his two East squad quarterbacks, Jake Fromm and Tua Tagovailoa, finished one of the most electric prime-time college football games ever.

“You spend a week with them, so you get to know people, and they’re good young men,” Kirschner says. “They showed up with grins on their faces and had fun, but they were both leaders who had no air about them. They weren’t going through the motions and took coaching because they wanted to be great.” 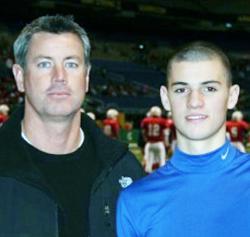 Chad and Will Grier

Grier says he has kept in touch with some of the players he’s coached in the past.

How do they stay in touch?

“The joys of social media,” he says.

A few years ago, Mohns accompanied one of his players (cornerback Byron Murphy), and he was fascinated by the speakers. One  general, in particular, delivered some inspiring recollections and points.

“I was blown away,” Mohns says. “It was a first-class experience for Byron and me.”

In subsequent years, Mohns served as an assistant and then a head coach. He says he now has two chains of text messages with other coaches he worked with.

“We still communicate and bounce ideas off each other,” he says. “You spend eight days and eight nights with a group of guys, and you really get to know each other and make some great relationships.”

“It’s pretty neat,” he says. “We support one another and ask questions. That’s something else this game brings.”

Berman believes the All-American Bowl endures because of the relationships, the history and a shared passion for football.

“What makes the All-American Bowl special is that it’s still that connective piece,” Berman says.