Massive youth sports directory will be promoted during PyeonChang Games

Parents can search, compare, and sign up for youth sports programs in their areas with information for all 15 Olympic winter sports as well as 55 other youth sporting activities.

In partnership with NBC Olympics and in support of the United States Olympic Committee and U.S. winter sport national governing bodies (NGBs), SportsEngine Inc. – a division of NBC Sports Group – will utilize its massive youth sports directory to connect kids who get inspired while watching the PyeongChang Winter Olympics with thousands of youth winter sports programs across the country, helping them to start their own Olympic journey.

During its upcoming coverage of the U.S. Olympic Trials and Winter Games, NBC Olympics will integrate a series of short promotional features into its coverage that promote today’s youth to get involved in Olympic winter sports, driving viewers to SportsEngine.com, where parents can search, compare, and sign up for youth sports programs in their areas with information for all 15 Olympic winter sports as well as 55 other youth sporting activities. 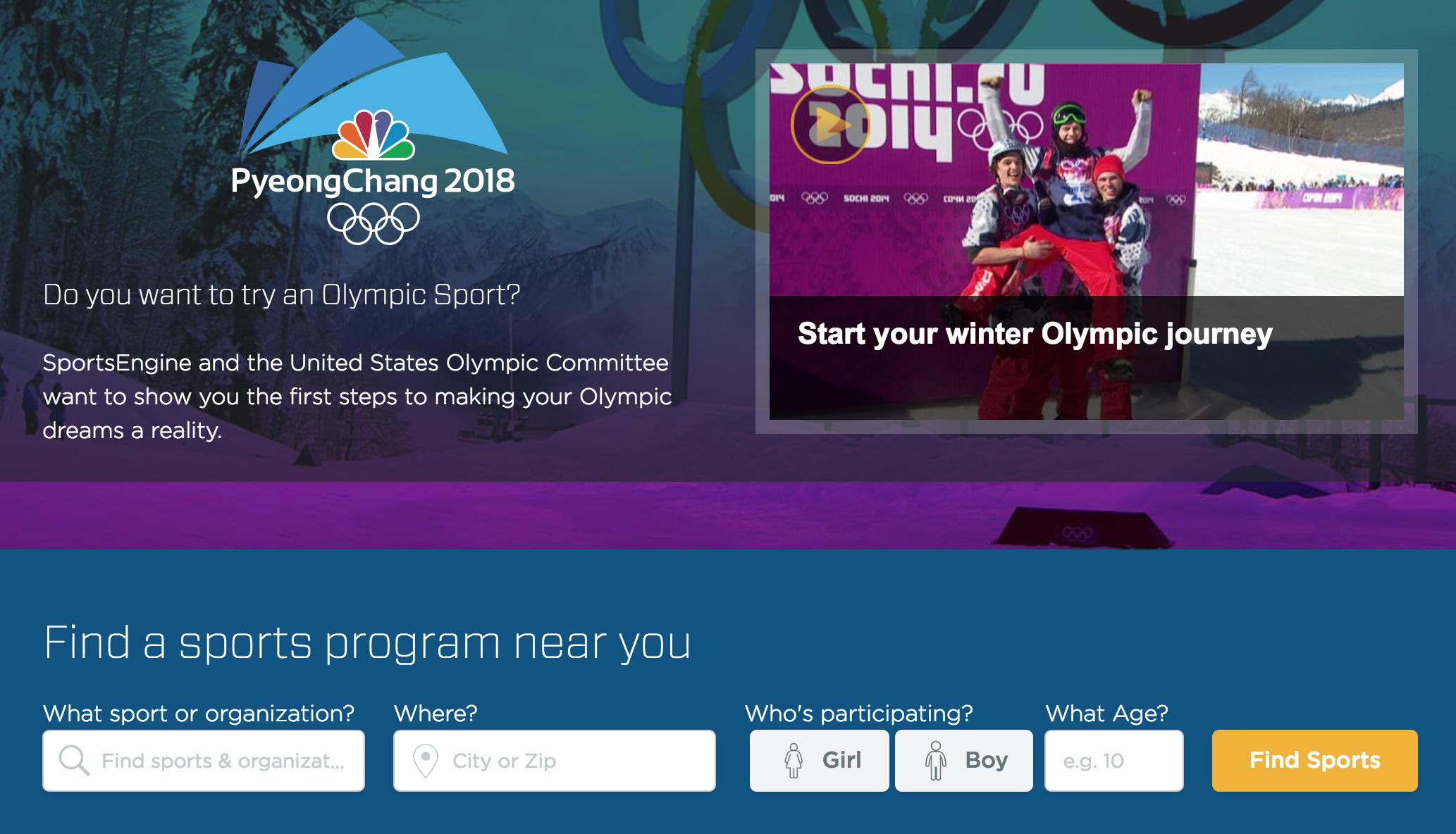 For the Olympic activation, kids who want to play hockey like Hilary Knight, figure skate like Nathan Chen, ski like Mikaela Shiffrin or snowboard like Shaun White can begin their Olympic journey by having their parents enter a few simple details, including the sport of interest and their location.

The site will then provide parents a custom list of programs across the U.S. and Canada – which can be further refined with age and gender – all at their fingertips.

In addition, the dedicated section for each Winter Olympic sport also contains a short-form video from Team USA athletes about how they cultivated their passion for their sport into Olympic greatness. Once a parent has found the right sport, they can immediately sign up to participate from SportsEngine.com.

SportsEngine.com will replace Gold Map®, which was originally launched prior to the 2014 Sochi Olympics, and utilized for the 2016 Rio Olympics. The feedback from youth participants and the NGBs was overwhelmingly favorable.

“The Olympic movement inspires millions of people, and there is no better time for the youth of America to start their Olympic journey than during the Games,” said Gary Zenkel, President, NBC Olympics. “Our Gold Map initiative has connected thousands of kids with National Sports Governing Bodies and sports organizations in their local communities for the past two Games, and with the power of SportsEngine.com, we’re confident that we will generate greater interest in Winter Olympic sports by providing parents and kids with a more seamless search experience.”

In addition, many listings on SportsEngine.com are sanctioned by that sport’s NGB, signified on the site with the NGB logo on the listing.

“Every two years, the Olympic Games brings the world together to witness and celebrate the incredible accomplishments of our most talented athletes, and their stories light a spark in countless youth throughout the United States,” said USOC Chief of Sport Performance Alan Ashley. “The USOC is thrilled to see how SportsEngine will harness that excitement and inspiration, and provide the next generation of U.S. Olympians with an easy way to get active in winter sports. It’s a phenomenal tool that will not only help get kids active and pursuing their own Olympic dreams, but help Team USA continue to field deep pools of talented, passionate athletes.”

Launched in 2017 with 20 different sports, SportsEngine.com now contains more than 100,000 youth sports listings spanning across 70 different sports for youth and amateur athletes in the U.S. and Canada.

Other Articles by NBC Sports