In 1823, during a game of football (soccer) at rugby school in England, 16-year-old William Webb ellis picked up the ball and ran with it towards his opponents' goal line. The reaction of his fellow players or any officials is not recorded, but the advantages of playing the game in this natural fashion were obvious to Ellis's schoolmates who followed his example. And so the game of rugby was born. 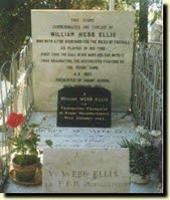 In 1823, during a game of football (soccer) at Rugby School in England, 16-year-old William Webb Ellis picked up the ball and ran with it towards his opponents' goal line. The reaction of his fellow players or any officials is not recorded, but the advantages of playing the game in this natural fashion were obvious to Ellis's schoolmates who followed his example. And so the game of rugby was born.

Though this might be somewhat of an embellishment, for which our English brethren are famous, rugby’s roots are traced back to this time.  The type of football played at Rugby School in Ellis's time was not soccer, but a game with a mixture of both soccer and rugby rules. Handling the ball was prohibited unless the ball was airborne when the player was permitted to catch it. After catching the ball he would stand still, as did all the other players and had the option of kicking it wherever he chose, or placing it on the ground and kicking for goal.  It should also be noted that in those days at English Public Schools the pupils often developed their own rules for the games of football they played. So it is possible that Ellis, during some game of football, did indeed run with the ball, setting an example soon followed by others.

Whatever the case, the story of William Webb Ellis is too good to have been abandoned, and he even has an official headstone in the grounds of Rugby School with this inscription:

THIS STONE COMMEMORATES THE EXPLOIT OF WILLIAM WEBB ELLIS WHO, WITH A FINE DISREGARD FOR THE RULES OF FOOTBALL, AS PLAYED IN HIS TIME, FIRST TOOK THE BALL IN HIS ARMS AND RAN WITH IT, THUS ORIGINATING THE DISTINCTIVE FEATURE OF THE RUGBY GAME.  A.D. 1823

By the 1840s running with the ball had become the norm, and by the 1870s rugby clubs had sprung up all over England and in the colonies. But different rules were being used by different clubs, and a meeting was held in January 1871, attended by representatives of 22 clubs, to resolve the situation. It was at this meeting that the Rugby Football Union was founded.  The first international match between England and Scotland took place at Raeburn Place in Edinburgh on  March 27,1871, resulting in a win to Scotland by one drop goal and one try to one drop goal.

Rugby is also the precursor of American football and has been played in the United States since about 1870. American football, as well as basketball, owes many of it’s characteristics to rugby. In fact, basketball was invented by James Naismith as an indoor alternative to rugby when the New England winters required an indoor game.  Some of rugby's characteristics such as quick switches between attack and defense, ball handling and committing defenders to attack space are all found in basketball. Some people liken rugby to tackle basketball on grass.

Similarly, American football evolved with many of the same principles, strategies, and tactics as rugby. In fact, between 1917 and 1919, during President Woodrow Wilson’s time in office, American football was stopped/postponed because of the large increase and severity of injuries on the field, and many of the heralded college rivalries substituted rugby for their football games during this time.  Eventually, the rules of football were modified and football again took center stage.

There are several obvious differences between rugby and American football. Rugby is played at a fast pace, with few stoppages and continuous possession changes. All players on the field, regardless of position, can run, pass, kick and catch the ball. Likewise, all players must also be able to tackle and defend, making each position both offensive and defensive in nature. There is no blocking of the opponents like in football and there is a maximum of seven substitutions allowed per team.