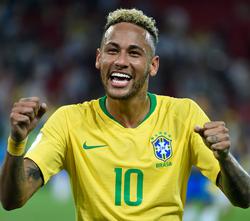 At just 26 years old, Neymar has forever changed soccer history. In 2017 he became the most expensive soccer transfer the world has seen after leaving FC Barcelona to PSG for a price tag of $262 million.

Now one of the world’s highest paid soccer players, Neymar’s story is truly one of rags-to-riches variety.

Born just outside of Sao Paulo, Brazil, and the son of a former pro soccer player, Neymar spent much of his early life migrating with his family as his father attempted through soccer and various other means to provide for his family, including work as a mechanic, as a salesperson and as a driver.

Yet despite Neymar Sr.’s best efforts, the family often struggled to make ends meet. At times, the family had to endure life without electricity.

Though he wasn’t handed life’s conveniences, as a result of his father’s previous profession, one thing Neymar always had growing up was a soccer ball. The youngster learned to play in the streets near his hometown and in indoor sessions unique to Brazil. At the age of six he was spotted by a talent scout and began playing for the Santos club in Brazil.

Neymar’s career progressed steadily for Santos, and he made his pro debut with the club at 17. A turning point in his career came in 2010 when he was offered a massive transfer from Chelsea. While considering the decision, the young Brazilian star was contacted by Pele, perhaps the greatest soccer player to ever live, not only in Brazil, but worldwide. The legend convinced Neymar and his father to stay with Santos for another few seasons, citing the importance of development and loyalty to their home country of Brazil. While we’ll never know what might have turned out with Chelsea, it’s safe to say Neymar’s decision has worked out. Four years later, Neymar finally did leave Brazil, joining Barcelona – a move that cemented the striker as a household name.

Recently, Neymar’s talent has earned him comparisons with Brazilian legend Ronaldinho and is such that he is widely considered to be the successor of the “best player in the world” title as Cristiano Ronaldo and Lionel Messi begin to slow down.

With his new club PSG, it’s simply more of the same. He’s shown to be unstoppable scoring 29 goals in 32 matches for the French club.

But Neymar’s glory isn’t limited to club-level. Brazil is the most successful nation in the history of the FIFA World Cup, and expectations are high. And Neymar has delivered. He is now the fourth all-time goal scorer for Brazil at just 26 years of age with 53 goals in 83 appearances.

He helped his country win its first-ever gold medal in the 2016 Summer Olympics, beating Germany in the final and extending his legacy. Neymar is also a huge point of reference in the Brazil attack going into the World Cup, where he will seek redemption after missing the last World Cup semifinal because of an injury.

The young Brazilian is in the best moment of his career and everything he touches seemingly turns to gold, his style of play is flashy yet effective, true to the Brazilian soccer style. But Neymar has a score to settle in Russia 2018 and all the tools in his arsenal to settle it. The stage is set this summer; all that’s left to see is if Neymar is the man to deliver and lead his country to a record sixth World Cup trophy.